In August of 1937, Jim Hamilton was born to one of the first families in the San Joaquin Valley to farm the fertile land. No one knew he would grow up to become one of the top leaders in the walnut and pecan industries. Growing up on his family’s 50-acre farm he was exposed to the hard work it takes to plant, care for and produce a bountiful crop. Jim looked forward to college and wanted to become a physics teacher, but when his father became ill, he was needed at home to help run the farm. 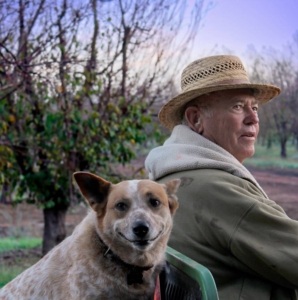 Jim and his faithful dog Maggie

His career path was set at a young age, when he purchased first property and acquired a small 5-ton walnut dehydrator. Working long and hard hours during the walnut harvest season, he began to look for solutions that would ease the workload and produce more harvest. Transitioning from poles to knock the nuts down off the trees, in 1964 he built his first mechanical tree shaker nicknaming it “Boom”.

Jim, along with the help of his wife and a few loyal neighbors, ran the dehydrator and harvested the crops. To continue the growth of his ranch, Jim and a school friend began a successful harvesting business in 1968 leading Hamilton Ranches to new heights. In 1974 Jim built a new walnut hulling line and dehydrator that was on the cutting edge of the industry. No plant of its kind ran faster, smoother and with more volume in the state. With the walnut industry thriving it wasn’t long until a second hulling line was needed to keep up with the demand. Today Hamilton Ranches Inc. has one of the largest, if not the largest walnut dehydrator in the state. It has the ability to dry over 850 tons per day, which can be turned every 20 hours. To accomplish this he designed, built and patented a new type of huller to take the green hulls off. The plant is capable of running over 20,000 tons of walnuts in a season.

In the mid 1980’s Jim noticed another opportunity coming into California…Pecans! Pecans are grown, harvested and dried much like a walnut. He added an additional hulling line to the dehydrator to accommodate the pecans, and eventually went on to develop a processing plant that cracked, separated, and boxed the commodity for consumer purchase under the Hamilton Ranches name. During this time he designed, built and patented a continuous meat dryer still used in the pecan processing plant today.

Jim’s recreation was hunting and fishing. He loved training and working his bird dogs. His favorite dog was a Drahthaar named Roger. He owned several of them throughout the years, naming them all Roger. He often went hunting with his sons and with friends and their sons. Anytime Jim could get away he headed up highway 180 to his cabin at Weston Meadows. Settled in the 1800’s by his grandparents, most every summer was spent there with his family, escaping the valley heat and the busyness of valley life. It was his refuge into the peace and quiet. The first thing he did when he got to the cabin was take a Weston Meadows nap (and not listen to the telephone that wasn’t there).

Jim was a visionary and had the ability to identify the need, the trend, the potential, or the better way. His customers were always at the core of his decisions. He loved inventing the perfect piece of equipment for the job at hand. He would think it, draw it and build it. Jim was always excited to make things work better, longer and increase production. Many of his designs and concepts are considered standard in the industry today.

Jim passed away in July 2019 at the age of 83. In the end, his family, friends and business associates were grateful for the times we had with him and we miss him dearly.

Today the family business Hamilton Ranches Inc. is being carried on by his two sons Chris & Dave along with our faithful longtime employees. Jim also had a third son Jerry who passed away in 2018. We are happy to say in the year 2020 Hamilton Ranches Inc. had it’s largest tonnage year ever run thru the walnut dehydrator thanks to our loyal customers.